I would have loved to stay longer, however, my accommodation for the night was the Ninety Mile Beach Holiday Park, some 100 km / 62 miles south. Ninety Mile Beach is not actually 90 miles in length, but only 90 km / 55 miles. This is because in the early days of settlement, the missionaries followed the assumption that a horse could travel 30 miles (50 km) in a day and it took them three days to travel along the beach on horseback. However, they did not take into account that walking in sand takes longer than on solid ground, hence the name. The holiday park I stayed at was located right on the beach, allowing for a marvelous sunset experience.
The next day took me further south, travelling via Kaitaia to the Hokianga Harbour. The Hokianga Harbour is an inlet from the Tasman Sea that extends about 30 km / 19 miles inland. It is in fact a river valley that was flooded after the end of the last ice age. I stayed the night in one of the most spectacular hostels I've ever seen, the Tree House in Kohukohu. 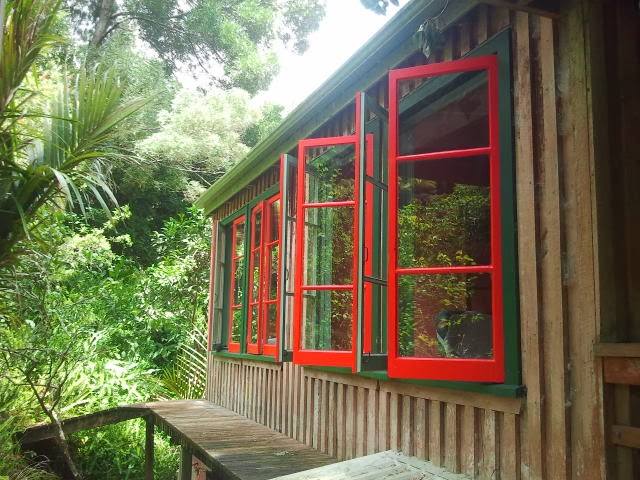 Funnily enough, the owners had family living in Newtown, NSW and went over to Kohukohu in 1981 to set up this special hostel. When asked about where the closest supermarket was, the owner, Phil, replied: "Oh it's best to take the ferry." Any bigger township was at least an hour's drive away from Kohukohu with the local grocer selling overpriced products. Instead, I actually ended up taking the vehicle ferry across to Rawene. It departs every hour on the hour from Kohukohu, takes 10-15 minutes across the Hokianga Harbour and departs Rawene every hour at half past, leaving me 20 minutes to do my shopping before catching the ferry back to my hostel.
The next day, I then took my rental car on to this ferry to continue my trip south to the Waipoua Forest, one of the few places that still features live Kauri trees. The biggest Kauri tree in New Zealand is Tane Mahuta, "Lord of the Forest", referring to Tane, the God of the Forest mentioned above. While this tree is "only" 51 metres / 168 ft high, its trunk has a girth of nearly 14 metres / 45 ft, meaning it would take at least 6 adults to reach around it. Its volume is equivalent to 517,000 milk cartons, 113,700 gallons of petrol or 7,300 kegs of beer - a truly amazing and awe-inspiring giant!
My way back up and across to Paihia led me past the villages of Opononi and Omapere on the southern coast of the Hokianga Harbour and to the Arai-te-Uru Scenic reserve with 360° views of sand dunes, a sheltered inlet, the open sea, forests, beaches and rock formations - to put it in a nutshell: a place that simply cannot be captured in pictures, not even panoramic pictures. But anyway, here are my attempts:

After an hour's drive from the west to the east coast (yes, it is that narrow), I reached the final stop of my trip, Paihia - the gateway to the Bay of Islands. Staying in a motel near the town centre, everything was within walking distance including the Marina from where passenger ferries depart to the township of Russell across the bay. Russell was the first permanent European settlement in New Zealand, featuring New Zealand's oldest church, oldest hotel and oldest petrol station. Owing to the early stage of settlement, the township of Russell was neither subject to Maori nor British law and soon became known as the "Hell Hole of the South Pacific". However, the architecture of this place remains as a silent witness of the early colonial times.
It was also in Russell that the British Governor Hobson read his Proclamations that constituted the beginning of the Treaty of Waitangi, the next and last stop of my trip. On February 6th, 1840, the Treaty of Waitangi established a British Governor in New Zealand, recognised Maori land rights and turned the indigenous population of New Zealand into British subjects. Different from the proceedings with other indigenous groups such as the Aboriginal people of Australia or the Native Americans on the American continents, this treaty provided the indigenous population of New Zealand with a supporting document to later reclaim their tribal land (because the British, of course, did not stick to the Treaty). The Treaty of Waitangi is considered the founding document of New Zealand as a nation, which is why February 6th, Waitangi Day, has become New Zealand's national day, with major festivities in 1990, the 150th anniversary.
In review, I cannot believe that this was just a four day trip, yet such an interesting and intense experience. My way back to Christchurch passed without further complications or disruptions, taking me half-way over this beautiful country that I have come to love so dearly - for its nature, for its people and for its humour.
Posted by Chris at 12:34

Chris
Germany
Hello and welcome to my blogs! My name is Chris, 22 years old and originally from Germany. I wrote my first blog when I was on exchange at high school in New Zealand and have started the second one when I decided to pursue my postgraduate studies in Sydney, Australia in 2013. It further includes my round-the-world travels in 2013 and 2014. I hope you enjoy reading and browsing through the pages! Have fun =)